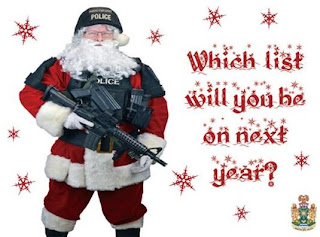 Front Page of today’s Vancouver Province was a picture of the Abbotsford police chief dressed up as Santa carrying an automatic weapon with the slogan: Which list will you be on next year? Some people have expressed outrage as it was part of a Christmas card sent out to gang members.

The cards are being sent to gang members, prolific offenders and property offenders this holiday season as part of Operation Resolution, with a help line for criminals wanting to turn their life around. The Abbotsford Times is referring it to an outreach program to offenders. It was funny and in good taste. Case closed. At least they are doing something which is better than doing nothing.

Abbotsford is the only pd that said they were going to release a top 10 list of gangsters. Although we’re still waiting, they are the only ones that said they would. There is nothing wrong with this proactive program. Like I said, it is humorous and in good taste.