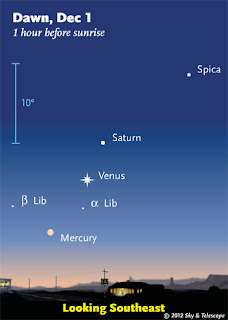 I completely forgot about the planetary alignment this month that is supposed to coincide with the Mayan calendar and the end of the world until one blog reader commented on it in my last post. So two things are happening, make that three. First is a planetary alignment which happens quite regularly so there’s no need to fear all the gravitational forces are going go pull the earth off course. This alignment is special because more planets are involved.

Planetary alignments occurred in 1982, 2000 and again last year. In 1982 they predicted the end of the world in what was described as the Jupiter effect. A popular book whose theory failed. It just didn’t happen. Last August I noticed two bright stars line up with the moon before sunrise. That was Jupiter and Venus. It happened each morning for a few days. Latter on in the week Mercury joined the alignment but since Mercury is so close to the sun it’s pretty hard to see. It’s only visible for a short time before the sun rises and it gets too light to see any stars. So although the sky will not fall, it’s worth having a look nonetheless.

Sky and Telescope dot com has a great weekly update on what to look for in the sky. Since December 1st the planetary alignment began again before sunrise just like last August. So far we have Saturn, Venus and Mercury joining the morning alignment. So if it’s raining one morning, like it is today, not to worry. The show lasts all week and will build up to the winter solstice alignment on December 21st.

The end of the world thing from the Mayan calendar is a bit silly. I saw one cartoon about a guy going back in time and asking the guy who carved the calendar why it ended in 2012. The guy simply said, “I ran out of room on the rock.” The Mayan calendar is of one period of time or era. Nasa compared it to the calendar we have on the wall in our kitchen. The world doesn’t end on December 31st each year, just the year. After that a new year begins. Likewise the Mayan calendar suggests that in 2012 one era ends and a new era begins. It’s just very interesting their era coincides with a large planetary alignment.

The Orion belt alignment is something different. It will line up with Jupiter and point to where Sirius will rise on December 3rd. Orion’s belt was mentioned in the comedy Men in Black. Only in the movie, Orion was the name of a cat and the belt was referring to the collar on the cat’s neck.

There are claims that on December 3rd three planets, Mercury, Venus and Saturn will line up with the three pyramids at Giza. There is a picture going around the internet simulating what it will look like. Obviously isn’t a real picture because the event hasn’t happened yet.

Either way, the fact that three planets will line up with the three pyramids at Giza on December 3rd is kinda cool and worth recognizing even if the sky doesn’t fall. The other doomsday rumor comes from the prediction of some stray unknown planet that is supposed to collide with the earth in December 2012. Only there is no such planet on collision course with the earth in 2012. The earth gets hit with meteors all the time. A large asteroid could cause problems on earth and some have come very close to the earth in the past. Just no big collision on schedule for 2012 so party on dude and enjoy the show. A new era begins. 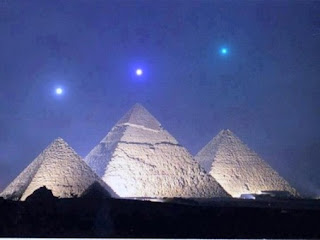 Update: OK it looks like the Giza alignment was a hoax. No pictures from on site posted yet. One picture of the alignment in Madrid shows the alignment to be much more vertical then in the photoshopped picture with the pyramids. Which is basically what we expected from the real version on sky and telescope dot com. The three planets align but more vertical than horizontal. So theoretically if you kept moving your point of reference around, the three planets could line up with the three pyramids only mercury would be very low and Saturn would be very high over the pyramids. So the Giza thing was a scam but the planetary alignment is real. You can see it every morning before sunrise until the 21st which is the peak. 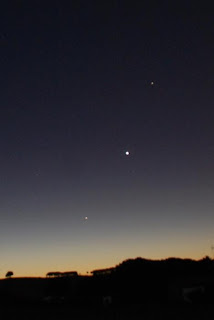