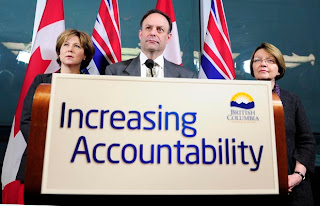 Woman advocates are left shaking their heads. Yet the BC Liberals problems happened long before Christy took the helm and Kevin Falcon is even worse. He’s just another Gordon Campbell clone in that conflicted crime family.

On the bright side, as a young lawyer in California, Rosenthal said he quickly gravitated toward white-collar crime and “holding the most powerful to account,” while “everyone else wanted to do blood and guts.”

“One man with a brief case can steal more than 100 men with guns,” he says, adding that the most difficult prosecutions are against the rich and powerful, because they’re often highly respected, well-liked, usually sociopathic and can hire the best legal defence money can buy.

So true. Does that mean he’s going to look into Christy Clark’s involvement with BC Rail and the laundering of drug money that went along with it? Or is he not allowed to bite the hand that feeds him? Please advise.