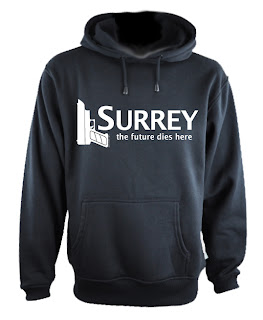 In contrast, gang members are coming out in support for the proposed mega casino in Surrey where they can launder their drug money. They have put out new casino support shirts. Instead of saying the future lives here, they say Surrey: the future dies here. Sad but appropriate. This mega casino proposal is anything but noble and good. Not surprising it’s tied to Gordon Campbell’s dirty developers. It is disappointing nonetheless.

Clarifacation: I'm joking about these being support shirts for the new mega casino although they might as well be. One blog reader wasn't sure what the shirt was and thought it was very dark, almost offensive. I was comparing it to the Abbotsford PD Christmas card that some people were complaining about. I was thinking if people were upset by the Christmas card they need to see what we are up against. I.E. The future dies here shirts. The gang problem and the torturing of drug addicts is very real. An editorial in today's Province was supporting of the Abby PD's christmas card.

This is what the creator of the t-shirts has to say and asked me to post: "Not even close K on linking this shirt design with support for the proposed South Surrey Casino or organized crime gangs. The message of this design is anti-gun/anti-gang violence. If you choose to mess with guns or gangs in Surrey, it is likely that your future will be very short. Surrey's record of targeted hits, day-time shootings and innocent victims being caught in the cross-fire speaks for itself."

"The shirt design may be dark and controversial but does nothing to glorify the dead-end gangster lifestyle. Hopefully it will make people think about what fate awaits them if they decide to carry guns on the streets of Surrey. Abbotsford police have turned their gang war around, hopefully the Surrey RCMP can follow their lead."

Turns out that the creator of these Surrey shirts also writes for the White Rock Sun in a column called the Naked Truth.