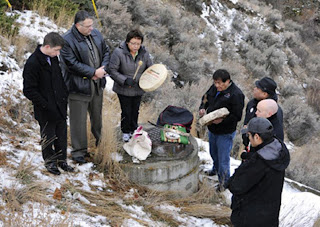 Sadly there was a murder in Kamloops this month on December 5th. A 16 year old girl from Terrace. Tragic. A meth lab was busted in Surrey. And a bizarre DUI in Kelowna but it wasn’t Giles this time. Giles is still in the pokey. Another snowboarder is rescued after going out of bounds on Cypress. Revelstoke too.

The government says it will contract out air to air refueling of the F-35’s if they buy them because they aren’t equipped to refuel those types of jets. Another reason not to buy them. I thought they said the deal was done. Looks like it was just put on hold while we recover from the shock of Harper selling our sovereignty to Communist China. A corporation that has it’s own police force and arrested people for their freedom of association.

Posted by Dennis Watson at 8:59 PM