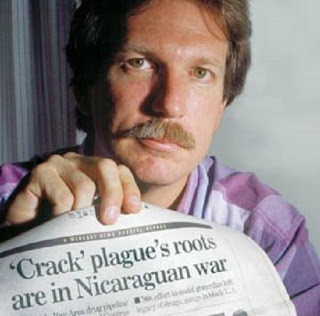 The Gary Webb series was a simple model logical progression. Gary Webb was an accomplished award winning investigative journalist. Garry Webb claimed the CIA were responsible for the US crack epidemic in the /80’s. After making that statement Gary Webb’s credibility was attacked. They claimed he was a conspiracy theorist. He was not.

The same person who made that absurd claim was himself pardoned by George Bush Sr. for their illegal involvement with Iran contra. Iran contra as we have established wasn’t just selling Iran weapons in exchange for the release of American hostages. It was selling Iran weapons to raise money for the Contra rebels in Nicaragua. It had nothing at all to do with freeing hostages. Yet Iran Contra went far beyond even that.

Basically, Gary Webb was right. Despite the personal attacks and political pressure his paper faced, he was right. The CIA were indeed responsible for the US crack epidemic in the /80’s. That fact needs to be established and reviewed because we are seeing the same thing repeat itself in the modern day Operation Fast and Furious.

So before I dive into the conclusion of my Gary Webb series this month we need to establish two things. First that Gary Webb was right. The CIA was in fact responsible for the US crack epidemic in the /80’s. They used the rationalization that the end justifies the means. They used the sale of cocaine to raise money to support the military campaign in Nicaragua to fight communism. Unfortunately, the end does not justify the means in real life.

The second thing we need to establish is that the CIA has a long history of drug trafficking. Operation Fast and Furious is very real. That is the same thing they did in Iran contra. That is the same thing they did under Bill Clinton’s watch in Mena Arkansas. Barry Seal and Chip Tatum were first hand witnesses of that. Bo Gritz and Terry Reed were first hand witnesses of the government’s involvement in drug trafficking in Vietnam. George Bush Sr. was directly involved. He is the one that fed the agency the poison kool aid and got them addicted to drug trafficking. Somewhat ironic that the agency’s headquarters is named after him. It forces us to question if there ever has been a good director of the CIA. A bitter tree cannot bring forth good fruit.

What went on in Mena Arkansas is relevant because it happened again in Mexico with Fast and furious. What happened in Vietnam is relevant because it is happening again in Afghanistan. The Taliban brought heroin production in Afghanistan to a grinding halt. After the allied invasion of Afghanistan that country has returned to being the world’s largest producer of heroin. Ever year after the invasion the production of heroin has steadily increased.

So, now that we have established that Gary Webb was right, we need to ask ourselves, if the CIA lied about drug trafficking, what else did they lie about? If the CIA broke the law then, what other laws have they broken and what else are they capable of? I’m not referring to 9/11. We all know about Operation Northwoods. We all know about the USS Liberty. We all know steel framed buildings don’t collapse at freefall speed into their own blueprint without the help of explosives blowing out the load bearing beams. Any architect or engineer will tell you that.

The conclusion of my Gary Webb series is going somewhere else. It takes us over the financial cliff. May the new era be an enlightened one where we learn from history and prevent the same criminal fraud from reoccurring over and over again.