Woman assaulted in Whalley over a drug debt 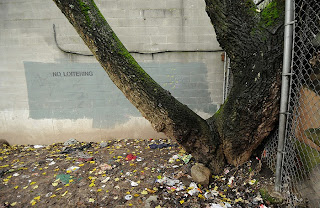 More details have emerged about the brutal assault in Whalley. The Surrey Leader is reporting that the witness who discovered the body found her chained to a tree moaning, trying with a weak voice to call for help. Her underwear was pulled down around her ankles, and she drooped from a tree, her arms chained to a big limb and her knees touching the muddy ground.

Some people in North Surrey are saying that in addition to being beaten, the woman was sexually assaulted and had one of her eyes scratched out over a drug debt. Over a drug debt. Where have we heard that before? Edmonton and Lloydminster? Who was responsible for that one?

Who controls the drug trade in Surrey after Eric Sandberg promised “they” were ready to eliminate all the competition in Surrey. A sex trade worker in Maple ridge was brutally raped by someone who claimed her husband had a drug debt to the Hells Angels. This is why we don’t turn a blind eye and let the Hells Angels get a monopoly on the drug trade. Torturing addicts for debts is not acceptable. That blood money is not worth it and we should not be laundering it in our casinos or on Wall Street.

Surrey RCMP claim they didn't find the woman bound to a tree when they responded to a call at 12:40 p.m. on Sunday, Dec. 2. They are saying she was a victim of a serious assault and suffered life-threatening injuries, including broken bones. As of Monday December 10th, the woman remained in hospital in critical condition, clinging to life.

Several people in Whalley are angered that police didn't release a warning to the public immediately following the discovery of the beaten woman. It was only after calls from The Leader days later that police released some scant details publicly. Smith isn't surprised. "This is the dead zone," he said as he walked north of 104 toward 108 Avenue. "They don't tell you when bad stuff goes on up here." The Vancouver Province expressed a similar concern in a front page article in their paper. Although they did write about it on December 5th. Perhaps the December 5th article was a tip not a press release from the police.

Torturing addicts for drug debts is a huge concern. Handing out free needles or crack pipes does not prevent addicts from being tortured. It just feeds the drug dealers greed. We need another solution. In this MSN video one local claims the first thing we have to do is get rid of all the drug dealers in that area and he is right. When we create no go areas that are tolerant of drug sales in hopes to contain it, we contribute to these kinds of outrageous assaults.

Rattan Mall has some interesting insight on the matter. He claims the Delta Police are more transparent than the Surrey RCMP when it comes to reporting crime statistics to the public. He asks if news is being deliberately suppressed to give Surrey a good image. Rattan even quotes the Balcony Rapist decision in Ontario. He recounts that in 2002, the Surrey RCMP were reportedly pressured to stop reporting every shooting incident as it was giving the city and then-mayor Doug McCallum a bad name. That tradition is now being continued under the new administration and has expanded to other districts.

It is time to turn the clock back and go back to reporting all serious crime to the public and stop surprising crime statistics. We keep hearing how safe Surrey is and we keep asking who’s smoking what. Over all Surrey is safe, yes but this dead zone in Whalley they refer to is just as bad as the DTES. Over all crime has dropped but in that area violent crime has increased and most of it doesn’t even get reported. Laundering that drug money in a new Mega Casino in Surrey is wrong.

Posted by Dennis Watson at 2:31 PM