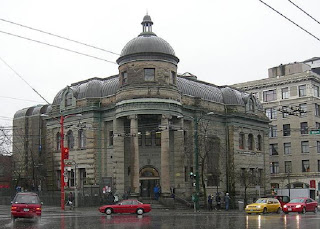 We’ve talked about how mixed-use development projects in East Vancouver are such a positive thing and how extremists are trying to oppose the projects because they might interfere with their drug sales. Well these same spoilt brats are still trying to hold the city hostage and prevent the biggest step forward this city has ever seen at Main and Hastings.

Now the brats are targeting the developer. When will their bullying end? Drug-user rights activists oppose the step forward because it will disrupt the area’s drug market and displace impoverished residents. You hear that? The drug dealers are complaining it will disrupt their business which is a good thing. They don’t care about the poor and the homeless in East Van. They profit from the exploitation and torture of the drug addicted homeless in East Vancouver.

This project will contain 79 low income rental units that currently don’t exist as well as 19 social housing units that don’t exist. Here’s the kicker – because it’s mixed development and other residents will be paying full rent, these low rent units are in a wonderful new building instead of a disgusting slum lord mansion. So if anyone really cares about the poor and homeless in the area they will support this social housing initiative. Only the drug dealers are opposing it and it’s about time they be evicted instead of holding the city hostage. Drug-user rights activists? Only in Canada. These are drug dealers people. Vandu is used as a drop off for drug dealers. That’s a conflict of interest.