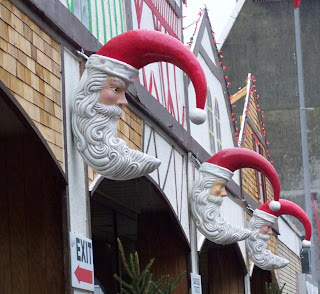 We’ve talked a bit about Vancouver rain and how going out and about on a fall rainy day is a very Vancouver thing to do. Christmas rain is a bit different. It’s hard to get into the spirit of Christmas in the rain. I think it’s a little easier to get into the Christmas spirit in the Okanagan or back east where there’s snow. We occasionally get a white Christmas but not often. We recently had snow in the city but the rain quickly washed most of it away as usual.

Yet one thing we need to remember about Christmas rain is that as long as it’s below 8 degrees Celsius, all that Christmas rain in Vancouver is fresh powder on the local mountains. If you’re not there you miss it completely. As I’ve said before, driving up the mountains and crossing over the freezing point where the rain becomes snow is magical. After spending the day on the mountain in fresh snow then returning to the rainy city below is like waking up from a pleasant dream. 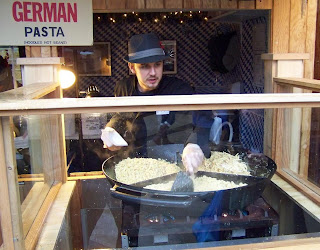 Nevertheless, today we went to the Vancouver Christmas market which is something fairly new. It’s a traditional German market with hand made crafts and lots of traditional food and drink. This picture is a local guy originally from Toronto dishing up some traditional German noodles. One is plain spaetzle for the vegetarians, the other is spaetzle fried with ham and Swiss cheese while the other is a different type of noodle with some potato mixed in. They’re quite nice. I’m not a big fan of sauerkraut though. I prefer the plain ones with a little glazed sugar. I like the spaetzle with ham and cheese. They had a girl from Switzerland glazing the cheese and the sugar with a small blow torch. I kid you not. 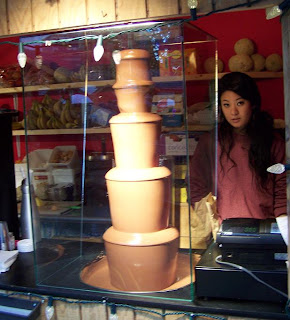 The chocolate fountain is a family favorite. I’m not big on fruit dipped in chocolate myself but I think the idea of melting chocolate and putting it through a fountain is cool. So even in the rain there are things to do to help you feel the spirit of Christmas.

I remember speaking with an Australian guy on one of the local mountains one winter. He said they’re not really big into the turkey dinner at Christmas back home. I asked him what a Christmas tradition was for him in Australia and he lit up and said we always have shrimp on the Barbie at the beach. Barbeque on the beach at Christmas I thought? Then I clued in, oh yeah Christmas is in the middle of your summer. That would definitely put a different perspective on it. Rolf Harris and the six white boomers. My father used to listen to that all the time at Christmas.

Speaking of Christmas, there’s a video going around of Nina Grewel saying how as a Sikh she is not offended by Christians celebrating Christmas. It’s a powerful video and pretty much sums up my definition of multiculturalism. Someone else’s traditions don’t diminish mine any more than my traditions diminish anyone else’s. She claims we can still use the C word and she is absolutely right. Merry Christmas everyone. May it be a peaceful one. 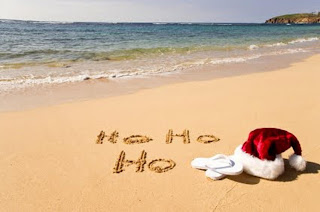