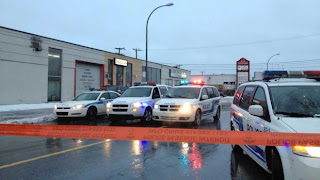 I’ve fallen behind in the gang violence over Christmas. So much for a December ceasefire. Freddy posted a few links in the other forum that are discouraging. Friday December 21st two men were shot in the head, at a strip-mall café in north Montreal. The next day the police claimed the victims had no ties to organized crime yet sources told CTV Montreal the victims were foot soldiers for the De Vito clan.

So what’s with that? A masked gunman shoots two guys in the head in north Montreal. How can that not be related to organized crime? December 17th Giuseppe Fetta was shot in north Montreal. Emilio Cordileone was shot dead December 8th. These guys have no respect for public safety or for a seasonal cease fire. They just don’t care. That’s what greed does to people. This morning there was another shooting in the HoMa bar in Montreal.

These are the same kind of guys that would shoot someone on Christmas eve then tell the shooter to kill his co accused just because. Just because they are untrustworthy and betray everyone they meet for the almighty dollar. They're all a bunch of skidmarks crying out to be flushed down the toilet of justice. Astounding they're driven by the Ontario Village Idiots.

On a lighter note, at least 45 centimetres of snow fell on Montreal on Thursday, breaking a record on Thursday that had stood since 1969.