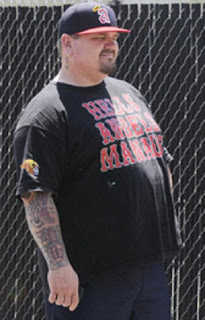 Two members of the Hells Angels in Hamilton, James (Bubba) Sherwood, 42, and Joel Rollin, 29 plead guilty to extortion and assault yesterday. A statement of agreed facts claims the pair went to a Greenhill Avenue residence on Aug. 8, 2011, around 6:30 p.m. and entered through an unlocked door.

The pair, one of them wearing a gold and diamond necklace with the biker gang’s name spelled out, was hired to force two former owners of an east-end bar to transfer a liquor licence in a sale dispute, court heard. Once inside, Sherwood confronted one victim and punched him in the neck. He then demanded the two former owners sign a document to settle the sale of their bar and punched one of them in the face, said Leitch.

“In the house were three young people, one still a child,” Leitch added. Once the document was signed and before leaving, Sherwood told one victim he was being taxed $5,000 for mentioning the Hells Angels and had a week to pay or they’d be back to take his car. Bubba received a three year sentence. Joel will b sentenced on January 29.