Canada, Mexico and the US sign new trade deal 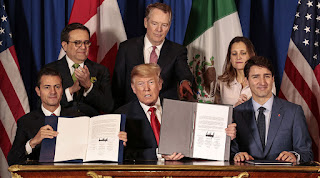 CTV is reporting that "Deputy Prime Minister Chrystia Freeland has signed on to an updated text of the renegotiated North American Free Trade Agreement on behalf of Canada at a ceremony in Mexico City." It's called the United States-Mexico-Canada Agreement - USMCA.

Livingston International is reporting that NAFTA Chapter 11, investor-state dispute resolution mechanism (ISDS) eliminated between Canada and the United States. Three f*cking cheers! NAFTA Chapter 11 Compensation Awards was the most insane and costly scam for everyone involved. It was a full scale attack on democracy.

The new trade deal was actually signed November 30th 2018 but the Democrats have agreed to advance it through the house.