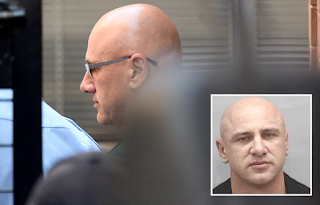 The Sydney Morning Herald is reporting that "A former Hells Angels methamphetamine cook who masterminded the shooting of his former bikie boss has been jailed for more than 13 years. Michael Basanovic was jailed on Wednesday for his part in killing Zeljko "Steve" Mitrovic inside a transport business in western Sydney in January 2013.

"Basanovic, 54, pleaded guilty in December to manslaughter as well as causing grievous bodily harm to Michael Bell, an office worker who was caught in the crossfire. He was sentenced in the NSW Supreme Court to 13 years and eight months' jail with a non-parole period of 10 years and three months. Because he has been in custody since May 2013, he will be eligible for release in August 2023. Justice Richard Button said that Basanovic had worked as a methamphetamine cook for Mitrovic before their relationship soured."

Crystal meth is a horrible drug. It is not speed. It's similar to speed in that it is an amphetamine but it's made with Drano. That sh*t will f*ck you up worse than crack cocaine.

Zeljko “Steve” Mitrovic has an interesting obituary. His funeral was a who's who of biker trash. The common denominator here is crystal meth cook working for a Hells angel. Just like Ryan worked for John Punko. Ryan was a long time crystal meth cook here in Surrey.

Wade Basanovic father is Michael Basanovic who was recently found "guilty of murder, and of causing grievous bodily harm to one of Mr Mitrovic's employees who was shot. The court heard Michael Basanovic was a member of the Hells Angels gang until 2011, and there was a long-running feud between him and Mr Mitrovic."

"Jailed underworld figure Sam Ibrahim gave evidence at the trial, telling the jury he and Mr Mitrovic worked for the same crew in Kings Cross in the late 1990s. While Ibrahim became the national president of the Nomads bikie gang, Mr Mitrovic ended up joining the Hells Angels." (Apparently in Australia they have a separate MC called the Nomads.)

"They met in 2012 because Mr Mitrovic wanted to discuss two men named "Mick and Wade" to ask whether they were working for the Nomads, which Ibrahim denied. Michael Basanovic testified that he previously worked for Mr Mitrovic, making up to $20,000 a night cooking methylamphetamine in two- to three-week stints. He said that after he stopped, Mr Mitrovic put out a $100,000 contract to have him set up, knocked, killed, murdered".

Posted by Dennis Watson at 9:37 PM