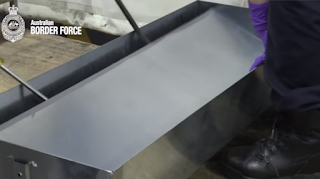 The National Post is reporting that "A Canadian man was arrested in Australia and accused of being a representative of a high-level transnational organized crime syndicate that imported 645 kilograms of ecstasy cleverly hidden inside a shipment for barbecues."

Reuters is reporting that "The Canadian suspect arrived in Sydney last week to visit the warehouse and was arrested in Brisbane on Monday. 'It will be alleged in court that he acted as a liaison for the criminal group responsible for importing the MDMA,' the ABF said. The Australian suspect was also arrested on Monday, while about A$300,000 ($204,000) in cash and 3.5 kg of cocaine were also seized." They had a tip...