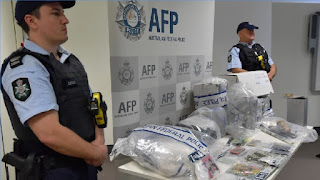 CBC is reporting that "A B.C. retiree suspected of heading an international drug syndicate is facing weapons charges related to guns seized from his subsidized home following an investigation that resulted in Australia's biggest-ever drug bust. Both Rolando Guajardo and his daughter, Melissa Valeska Guajardo, are scheduled to appear in Vancouver Provincial Court later this month to face firearms possession charges connected to a Beretta pistol and a shotgun allegedly found in their Burnaby townhome last February.

According to a search warrant obtained by the CBC, the RCMP was brought into the case by the Australian Federal Police and the U.S. Department of Homeland Security last January. Australian authorities allegedly intercepted communications linking Guajardo to the owner of a California-based car-speaker business accused of trying to smuggle more than a billion dollars worth of methamphetamine, cocaine and heroin down under."

"Guajardo is not facing any criminal charges in connection with the seizure of the money or the Australian police investigation that led to the arrest of six people in that country earlier this year." WTF? No criminal charges they just want to tax him. The government wants to profit from crime.