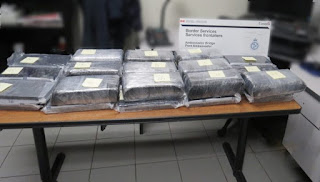 The Indo Canadain Voice is reporting that "The Canada Border Services Agency (CBSA), Southern Ontario Region, and the Royal Canadian Mounted Police (RCMP), Windsor Detachment, on Monday announced the seizure of 30 bricks of suspected cocaine at the Ambassador Bridge and the arrest of a Brampton, Ontario, resident. On December 15, a lone male driving a tractor trailer arrived at the Ambassador Bridge Commercial Operations in Windsor, Ontario, and was referred for a secondary inspection."

"During the examination, border services officers discovered 30 packages of suspected cocaine, weighing an approximate total of 40 kilograms. The CBSA arrested the driver and seized the suspected cocaine. The RCMP attended and took custody of the driver as well as the evidence. The RCMP charged Manjinder Gill, 44, with importation of a controlled substance, and possession for the purpose of trafficking."