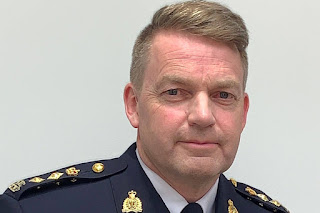 The Colverdale Reporting is reporting that "Chief Superintendent Brian Edwards has been selected as the new Officer in Charge of the Surrey RCMP detachment, the City of Surrey announced Wednesday afternoon (Dec. 11). A transition plan will see Edwards start in his new job on Jan. 6, 2020. He will be promoted to the rank of Assistant Commissioner upon assuming his new role, according to a news release."

“I welcome (Edwards) in his new role as Officer in Charge of Surrey RCMP,” Mayor Doug McCallum said in the release." “In his policing career spanning 24 years, (Edwards) has served with both RCMP and municipal police departments. His extensive experience in strategic and business planning will be an asset as Surrey transitions from the RCMP to a municipal police department.” McCallum is leading a charge to replace the RCMP in Surrey with a city police force." Exactly. That is what he was elected to do. Surrey is the largest city in Canada without it's own police force. Dwayne McDonald wasn't just a disappointment, he's on the wrong team.