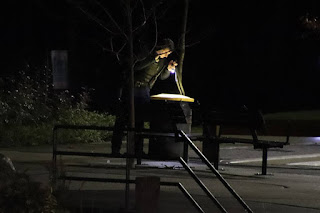 The Peace Arch News is reporting that "Surrey RCMP say a 25-year-old man is in hospital with non-life threatening injuries following a late-night shooting in Guildford Monday (Dec. 16.)" He was shot near Hawthorne Park in the 10500-block of 144th Street around 10:45 p.m.

The North Delta Police are reporting that "At approximately 8:35 p.m. on Friday, December 13, Delta Police responded to report of shots being fired in the 11800 block of 73A Ave. 'There were no reported injuries, but we can confirm that several shots were fired into the residence and the vehicles parked in the driveway,' says Cris Leykauf, spokesperson for Delta Police. The incident is still under investigation, and appears to be targeted." North Delta has it's own police force.