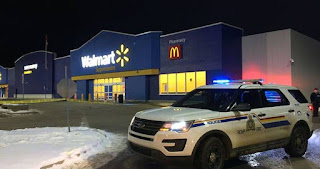 The Edmonton Journal is reporting that "A 69-year-old man is dead after being shot outside of a Red Deer Walmart Friday night. RCMP responded to a report of a shooting at the front entrance of the store just before 7 p.m. Police said a man had been fatally shot and died from his injuries. Online reports of multiple victims were incorrect, police said. It appears that this could have been a targeted shooting, police said Friday."