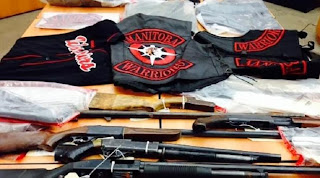 The Winnipeg Sun is reporting that 57 members and associates of the Manitoba Warriors have been arrested in a police operation referred to as Project Falling Star. Global is confirming the arrest where numerous firearms were seized along with trace amount of crack cocaine and crystal meth. The Manitoba Warriors are a Native gang that would be seen as Hells Angels rivals. Hells Angels busts involve a much larger quantity of drugs.