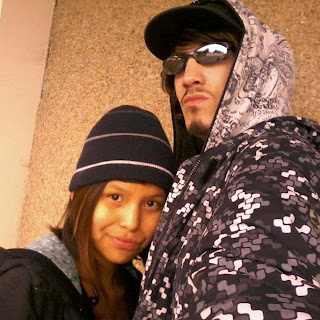 The Vancouver Province is reporting that charges have been laid in the 2012 Kamloops murder of 16 year old C.J. Fowler. "Damien Lawrence Taylor, 22, has been charged with murder. Taylor had been dating Fowler at the time of her death. The two were both from the Terrace area, and had traveled to Kamloops to meet friends. Summer Star Elizabeth Krista-Lee Fowler, a member of the Gitanmaax First Nation, was last seen leaving a Kamloops hospital in the early morning of Dec. 5, 2012, and walking down a street to catch a bus back to Terrace."

Kamloops this week posted a picture of the girl and the accused. Last seen walking home from the hospital? Another tragic case of domestic violence. I'm concerned that the first homicide of the year in Surrey will slip through the cracks like the Jammie Keyhoe murder and the Kyle Yellowbird murder. That would be the third obscene travesty of justice in Surrey.

The name of the 19 year old woman that fell from the Tower in Surrey 1:00 AM New Years Day was Maurine Arogie. There have been several reports that the police were responding to a 911 domestic assault call when she fell to her death. There have been reports that the police had visited the apartment before for domestic violence calls. The Surrey Leader reported that Maurine had called her father earlier saying she was being beaten. A family member then called the Surrey RCMP.

On the initial post one blog reader was quite rude and was sluffing the case off as a suicide. I deleted the comment because I don't want to entertain that kind of offensive disrespect. I saw the sorrow in her fathers eyes the next morning when he came to see the spot where his daughter died. He was a good man who genuinely cared about his daughter. The sorrow in his eyes haunts me like the expression on Britney Irving's face when she was found dead from being shot in the back by someone she cared about and trusted. It takes me time to process those kind of images.

I'm going to post the follow up interview with Kerri Krysko and take some time off. I still have to catch up on stories from Victoria and PEI but with all these murders it's easy to become desensitized to the tragic senselessness of it all. These aren't numbers these are people. Lives cut short. Families left to mourn. Something has been taken from them that can never be returned. Life does not end at death and justice will not sleep forever. Yet I want to take some time to pause and emphasize the brutality of murder and once again point to a much better place. I'm working on another story that will become the climax of the kaleidoscope for the Surrey Winterfest. Peace.