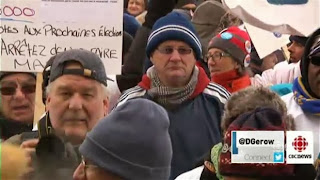 Hundreds of protesters showed up in Ottawa the other day protesting the unprecedented scam Canada Post is involved with unilaterally implementing huge changes without any public accountability based on bold faced lies. Although this is the kind if thing that doesn't normally enrage the public the fact that public accountability is being thrown out the window and the fact that these changes are based on bold faced lies clearly does have serious ripple effects on Canada's future as a democratic nation.

The NDP are opposing the decision and have pledged to force the unilateral changes to a vote in Parliament. Which will in effect do nothing other than call a spade a spade and place the blame firmly on Stephen Harper's shoulders where it clearly belongs. This isn't just a Canada Post scam it is a Stephen Harper scam.

The last time there was a labour dispute at Canada Post is was because Stephen Harper stole the employee's pension. Canada post lied to the media about what changes they wanted to implement, locked out the employees then had Harper legislate them back to work with an imposed settlement that in effect stole their pensions. Everyone loses when pensions are stolen. In contrast Harper is on a spending spree with tax dollars in the middle East. That is not fiscally responsible.

Letting Canada Post lie to everyone so boldly in the media is fraud. Removing public countability from a Crown Corporation that consistently makes record profits and pays large dividends to the government is not a good thing. Taxpayers get hit twice. They lose their say and their taxes increase. This is a bad precedent for everyone.