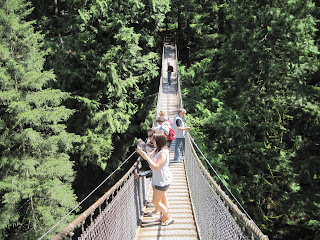 CTV is confirming a body has been found in Lynn Creek earlier this evening. An extensive search was conducted in the area recently for missing British tourist Tom Billings, but there is no indication the remains are his. OK so Lynn Creek runs under the Lynn Canyon suspension Bridge in North Vancouver.

The missing British hiker was reported to have embarked on a hike from the Lynn Headwaters trying to do Crown mountain then over to Grouse mountain. That's further up stream in Lynn Creek thus the name Lynn Headwaters. It's physically possible to hike to Grouse mountain from the Lynn Headwaters. It's long and flat except for the last part up the other side of Dam mountain which you then climb down to get to the top of Grouse. Doing Crown mountain before that is possible but it is one long ass hike. You have ot go all the way up Crown mountain, all the way down it again, then all the way up Dam mountain only to climb down it to get to the gondola on grouse. It's a summer hike not a winter hike. I've done Coliseum mountain from there and that is a all day hike.

Durring the summer lots of people drown in Lynn Creek. They go swimming and get swept under by an undertow. The only safe spot to swim is the 30 foot pool. But even there you have to be careful wading across the creek in the spring melt off. The water is higher and faster then. The 30 foot pool part is fine for diving in but the rest of the creek is a bit dodgy that time of year.

The Vancouver Province also reported that a woman's body was pulled out of the Fraser River near Knight Street Bridge Thursday morning. Police have not identified the remains or learned circumstances of death but claim there is no indication of a suspicious death at this point. How on earth can you say that when you haven't determined the cause of death? We'd be a little more confident it's not a suspicious death when they release the id of the body.