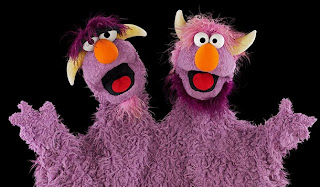 Well, well, well, trouble in Paradise I see. In case you missed it, the front page of the Surrey Now is about how Dianne Watts apologizes for clicking like on a facebook comment calling her fellow Counselor a coward. Only the original comment didn't say coward it said something else.

One would think that no one would care who does what on facebook. I don't. However, this is rather significant because it shows two things. It shows that there's trouble in paradise and that Team Godzilla contains a split. It also shows Dianne Watts perpetual bullying outside of her denial. Vancouver 24 hours is now reporting that Surrey’s mayor looks vulnerable. Perhaps that's why they are so nervously attacking others.

What Dianne Watts did was click like on an act of cyber bullying. Isn't that ironic? Insert I told ya so here. Not only was it attacking and bullying a fellow city counselor, but an independent blogger as well. I wish I could say this kind of conduct is shocking but it's not. When an independent blogger stands up against the main stream propaganda, they often set themselves up for bullying and character assassination. Why just ask Gary Webb.

What I'm shocked about is that the comment originally came from Alex Tsakumis. I didn't know much about his background but I've heard his name as a local blogger. That kind of cyber bullying from another blogger is shocking and disappointing. Don't get me wrong. I do think Barinder Rasode is a raging lunatic and I will explain why after we get this all out in the open first.

The attack on Laila Yuile is not only a blatant act of cyber bullying it was done under false pretense. From everything I've read, I can't see Laila supporting Rasode. Laila was against the mega casino and Rasode is for it. So the fear based bullying is unwarranted. Tsakumis' credibility has been diminished.

The Vancouver Sun is reporting on part of the facebook post Dianne Watts clicked like to. Only it's missing the coward part which didn't say coward it said whore. That's right folks. Dianne Watts clicked like on a Facebook comment calling her fellow counselor a whore. That is what it originally said. First it said whore then it was changed to read media whore. I have several blog readers that have sent me copies of the original post.

"So very disappointed by Surrey Councillor Barinder Rasode's histrionics, division and lack of leadership. For the latter part of this week, since the utterly tragic death of Newton hockey mom Julie Paskall, Rasode (shamefully aided and abetted by Surrey gadfly, 24hrs columnist and avowed Dianne Watts hater Laila Yuile) has been using the death of a woman whose body isn't even cold, to score politi...cal points for herself. Surrey has a crime problem, today, no differently than Abbotsford did years ago and Vancouver before that. This is the drug business correcting itself. There is NOTHING anyone but the RCMP can do to help. But leave it to two shameless women (Rasode and Yuile) to use the death of a hockey mom in an attempt to advance their respective careers--and take veiled, cowardly shots at Watts and the rest of Surrey council in the press. As a former resident of Surrey and long time (current) Surrey business owner, I think both Yuile and Rasode (particularly Rasode) should be held with the utmost contempt for their disgusting conduct and outrageous statements. Making positive statements based on fact is one thing, but being a whore is quite another." by Alex Tsakumis, liked by Dianne Watts.

One of the blog readers that sent in the original quote asks: "If Dianne Watts apologizes for clicking like on a facebook posts that called Rasode a coward, does that mean she's not sorry for liking the post that called her a whore?" Please advise. 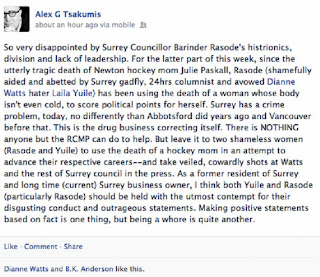 I will add that I don't even know Laila other than having noticed she supported Ross Buchanan in the last civic election and that her blog is very well written and well researched. That's why I linked to it on my blog a long time ago. Her being bullied is further evidence of what I was saying about Dianne Watts' bullies. Catherine Austin Fitts refers to them as the attack poodles.

Update: It's rather stunning to see Alex Tsakumis boldly declaring in writing he stands by his post calling Barinder Rasode a whore. This guy is a bully and a freak. Since he blindly endorses Dianne Watts that means he supports the public scam involved in Campbell Heights. That not only puts his credibility into question but his integrity as well. Welcome to the Surrey Monster Mash.