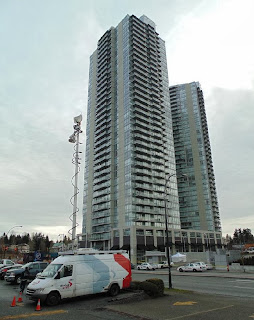 A tragic start to the New Year. News 1130 is reporting that a woman fell to her death from a tower in Surrey and that the police are treating it as a homicide. The tower is located on 100th Avenue off Whalley Boulevard and the woman fell to her death at 1:00 AM New Years day. News 1130 is reporting that an arrest has already been made. Another homicide one hour into the New Year. Another blog reader said other cities focus on the first bay of the new year while we in surrey focus on the first homicide in the year. Very sad indeed. 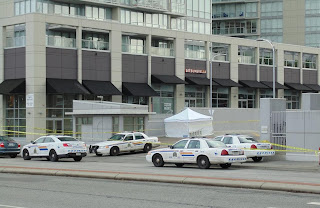 I took some pictures from the scene and a man asked me what happened so I told him what I knew. Someone asked what floor she fell from and I said I didn’t know. The man said the 26th floor and I asked who said that. He replied I did. I kind of hesitated as he kept repeating I did. Then as he got into his car he broke down in tears and said it was his daughter. I was stunned and said I’m sorry for your loss.

I spoke with some reporters on scene and they confirmed it was from the 26th floor. This is absolutely tragic. Another horrible loss. Another horrible tragedy. This was a really nice man who really cared about his daughter. I am so sorry for your loss. 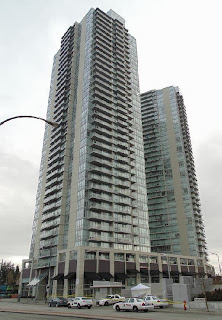 IHIT was on scene later on in the afternoon. 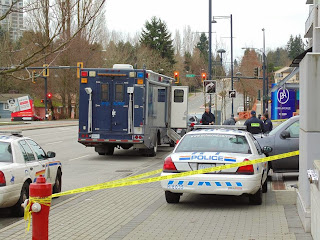 The first flowers showed up this afternoon to pay their respects. 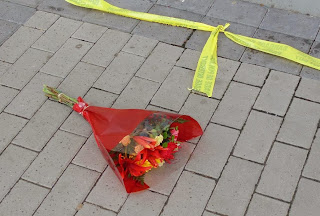 More flowers and candles by early evening. Let's hope the city doesn't take these ones away. We need some of these at the Newton Arena site. Looks like they already have. 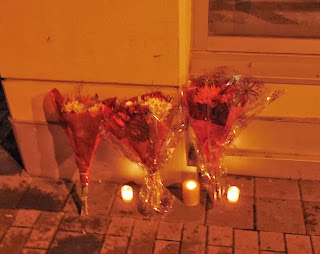 Update: Global is reporting that the victim was 19 years old and that police were on their way to a domestic dispute call at the apartment between the woman and a 23-year-old male when they saw her fall to her death from 26th floor. Seemingly it wasn’t the first time the police had been to the apartment.

The 23-year-old male is currently in custody but police have not laid any charges in the incident yet. Global is reporting that the police claim “We have gotten cooperation from one person who was inside,” said Dan Splinter, Surrey RCMP. “We believe there were more people inside at the time and would like to speak to them.”

Posted by Dennis Watson at 1:02 PM