The Newton Community Meeting was a Farce 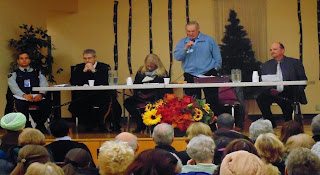 Tonight at 7:00 PM there was supposed to be a public forum about the Newton murder and drug related violence but Dianne Watts bullied the president of the Newton Community Association into letting Bill Fordy and Karen Reid-Sidu highjack the meeting and tell everyone what a wonderful job they're doing instead. When Bill Fordy got up to speak I had to leave the room to be sick. Transfer. That guy was not supposed to speak at that meeting. He was supposed to listen. Something that political sleazeball is incapable of doing.

There was limited seating and over 300 people were turned away. The media was not allowed in. They had to stand outside and speak with some of the people who didn't get in. This woman explained her concerns about not feeling safe in the neighborhood. Note the guy in the back sporting one of the famous "Revolving Door Makes Judges Accomplices" T-shirts. 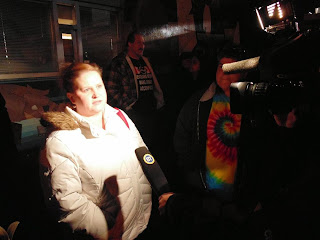 Karen Reid-Sidu is from the Surrey Crime Prevention Society and is a personal friend of Dianne Watts. Her husband is a cop. She is paid to oversee the volunteers. There is no question that the volunteer patrols the Community members do in Newton and elsewhere in Surrey is a good thing. These volunteers show that the Community members care about their community. This was not the time and place to tell everyone what a wonderful job you're doing.

These are volunteers. Most of whom work during the day. It is a good start but they don't have the authority to arrest drug dealers. They just report crime to the police. Hell the businesses are doing that and they claim the police aren't doing anything about it. They are letting crack dealers sell crack there. That is the problem. All their Laura Balance bullsh*t won't change that simple fact. So yeah, the meeting was a compete waste of time and nothing has changed in Surrey from the 2008 Crime Prevention Meeting. Nothing has changed. They still aren't listening.

It's the same problem from June 2013 when the police and the city were letting crack dealers sell crack in a Surrey trailer park and refused to do anything about it. Let's not forget how Dianne Watts was caught lying in the Surrey Leader. When people wrote in and confronted her bold faced lie the Leader had to print a retraction. Go Godzilla.