Being Uncle Charlie: A Life Undercover with Killers, Kingpins, Bikers and Druglords 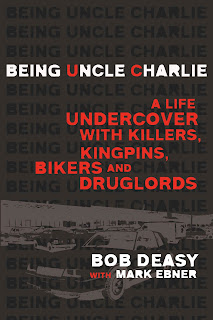 Former OPP undercover police officer Bob Deasey has put out a new book called Being Uncle Charlie: A Life Undercover with Killers, Kingpins, Bikers and Druglords available on Amazon. I understand he will be in Vancouver on January 20th and 21st to promote his book.

I understand the book is mostly set in Ontario which would give a good background into the Hells Angels / Outlaws struggle for the drug trade there and the respective alliances with various other mafia groups which as we see are also tied to the Montreal violence.

In Chapter 11 Outlaw Bikers, he states "For people who don’t live in Canada, it’s hard to convey the significance of outlaw biker gangs and the criminal influence they exert here. A biker gang like the Hells Angels is quite possibly the most efficient criminal organization in the history of the world. Their presence in Canada is ubiquitous, which means that they show up in almost every project I’ve ever been a part of."

One old timer who opposed the Para-Dice Riders patch over who had been a biker his whole life, tried to tell the younger guys they had no idea what they were in for; once the HA rolls in. He said it’s all about them and not about you. Very true as we see the slash and burn trail of people they have used and tossed aside like an old shoe.

For me, the most important thing about this book is how it explains the inner working of the Ontario Biker Enforcement Unit which has been very active and successful in dealing with the drug trade associated with the Hells Angels in Ontario. One of the things he says is that a constable walking a beat will get to know his constituency. I cannot emphasize how true and how important that statement really is.

That is one practice the RCMP have generally abandoned. Back in England Bobbies walk the beat. That historical tradition is longstanding. It is the most proactive form of crime prevention known to man. If a drug dealer is selling drugs outside a business and refuses to leave, watch what happens when a cop stands on the corner beside him making a note of every car that drives up and person that talks to him. It makes a huge difference.

I remember one law enforcement officer explaining that the RCMP changed that tradition and adapted a new reactive policy. They distanced themselves from the public and became reactionary. They storm in after the fact to deal with the emergency and then remove themselves from the scene. It's kind of the robocop mentality. Personally I think it's a tragic policy change that weakens public trust as well as police effectiveness. Walking the beat is a good thing. I have seen it work.

You get to know the public and they begin to trust you. If you're not an arrogant prick that is and you do in fact build a relationship of trust with the people you serve. Once that trust is established and maintained, crime is dealt with much more effectively. An increased police presence in Newton and outside the Front Room would do wonders at curbing the drug trade there and the subsequent trickle down violence it creates all over the city.