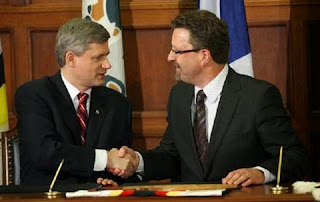 The National Post is reporting that Chuck Strahl has quit as chairman of Canada’s federal spy watchdog following accusations of inappropriate lobbying activity. CBC is also reporting on the story as well as the Straight dot com. Chuck Strahl is a former Conservative cabinet minister from Chilliwack. This is very conflicted.

The last head of the CSIS watchdog resigned after he was caught giving money to an Isralei arms dealer tied to Iran contra. Then he was arrested for fraud, laundering the proceeds of crime and participating in a secret commission. I kid you not. Right now the fact that the former head of the CSIS watchdog in now working for Enbridge is a colossal conflict. Once again all those state secrets are now in the hands of a large corporation. A corporate monopoly at that.

As we recall Canada was caught spying on Brazil on behalf of a corporate monopoly. It had absolutely nothing to do with State security. In fact Chuck Strahl was the one covering up the latest Snowden leak that revealed Canada has set up covert spying posts around the world and conducted espionage against trading partners at the request of the U.S. National Security Agency.