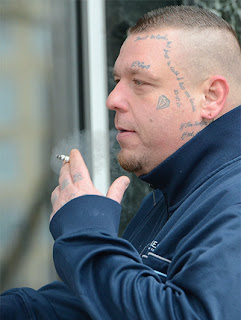 The Pentiction Western News is reporting that Steven King was in court for possession of crack back in 2010 when he was a member of the Game Tight Soldiers striking for the Renegades.

This is another example of a flaming idiot. Take a look at his new facial tattoos. They're all over the map and look stupid. He claims he's innocent and that he has left his old life behind. Oh really? Like when? In 2012 he was with the Rock Machine kissing Outlaws ass. So just when did he leave his old life? When they kicked him out of the GTS and shot at his fat ass? Or when the Rock Machine and the Outlaws tossed him to the curb?

If he has left his old life behind then he was dealing drugs in 2010 when he was charged. Some girl is trying to take the fall for the loser. In court he claimed he wasn't the leader of the GTS but that's not what he told Kim Bolan and the police when he was striking with the Renegades. This guy definitely gets loser of the week. He's the Sofa King alright. He's sofaking stupid it's hilarious.

Posted by Dennis Watson at 3:06 AM