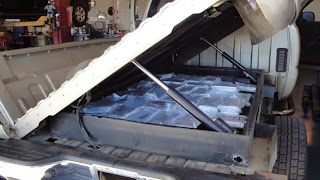 The Calgary Herald is reporting that 15 months ago a Nevada Highway Patrol officer pulled over an Alberta man named Austin William Hill driving a pickup truck on a highway north of Las Vegas. He was caught with 45 kilos of cocaine.

Last week, police in Calgary arrested three men accused of orchestrating the operation. Christopher Mark Scher, 33, Michael Mirr Janecek, 37, and Steven Manuel Doporto, 31, have each been charged with conspiracy to import cocaine, conspiracy to traffic cocaine, possession, trafficking and possession of proceeds of crime. Authorities didn’t specify how investigators determined the cocaine was destined for Calgary. The Calgary Sun, Global and CTV are all reporting on the story.

Investigators believe the operation successfully smuggled several hidden loads of cocaine into Canada over a six- to eight-month period prior to Hill’s arrest. Police said the cocaine originated in Mexico and was allegedly acquired through connections with drug cartels, even though none of the suspects have criminal records or any ties to established organized crime groups. That another ridiculous statement.

Two,local drug gangs fighting each other over the drug trade in Calgary are the FOB and the FK. The Hells Angels supply the FOB through the Independent soldiers. The UN supply the FK. That means this ring was for the Hells angels or the UN. There is no way an operation that large would be independent. No way.