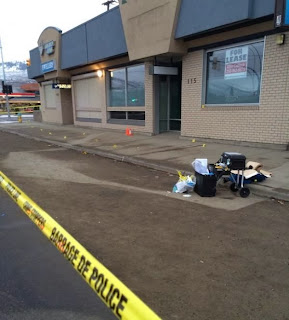 Castanet is reporting that Kelowna RCMP officers discovered the body of a 32-year-old Kelowna man on the sidewalk in Rutland which is in Kelowna early this morning. A large blood splatter could be seen where the mans body was found. The death has been deemed suspicious in nature and the Kelowna RCMP Serious Crime Unit is investigating. The identity of the deceased is being withheld pending the notification of his next-of-kin. That's a lot of evidence markers. It doesn't necessarily mean shell casings. It could be drops of blood.