A much better place 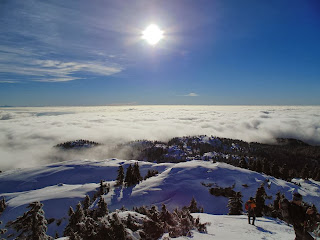 Today I made it up snowshoeing on Seymour. It was awesome. Finally. It has been such a lousy year for snow on the coastal mountains. It reminded me of the Vancouver Olympics which was an el Nino only worse. I checked the weather and it called for sun after fresh snow Thursday night. 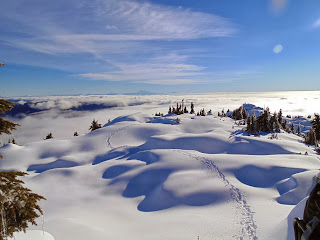 Not only was it a sunny day but there was an awesome inversion happening. That's when the clouds hang low so that you're above the clouds in the mountains as though you're flying above them in an airplane. I've uploaded a bunch more pictures to Flickr. This is what I mean when I say a better place. This is where I find my own peace of mind. Getting the heart pumping and the lungs working scaling the mountains and enjoying the view. It helps me put everything in perspective.

They say crack gets you high. No it doesn't. It doesn't get you this high. No drug can do that. And there's no crash afterwards. Just a mental and physical peacefulness that lingers for days. Now that's what I'm talking about. In the Surrey Winterfest I wanted to highlight the drug related violence outside the Front room in Whalley and Janice Shore's brutal murder. I also wanted to highlight a kaleidoscope of other things. Better things. Things you just can't find in a crack pipe. High above the desert plain where the street have no name.

With the return of the el nino that just means I'm going to have to go east. When we have an el nino Eastern Canada and United States gets nailed with a very cold winter. I'm going to discover some new peaks this year for the climax of the Surrey Winterfest. A little surprise for later on. 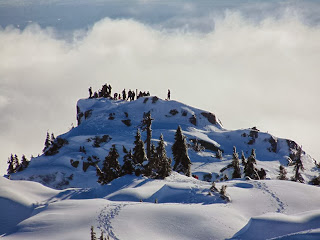