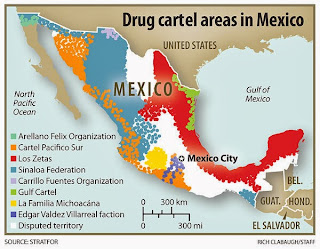 Speaking of busting Hells Angels rivals, Time World is reporting that "the U.S. government allowed the Mexican Sinaloa drug cartel to carry out its business unimpeded between 2000 and 2012 in exchange for information on rival cartels, an investigation by El Universal claims."

"Citing court documents, the Mexican newspaper reports that DEA officers met with top Sinaloa officials over fifty times and offered to have charges against cartel members dropped in the U.S., among other pledges. The period when the relationship between the DEA and Sinaloa was supposed to have been the closest, between 2006 and 2012, saw a major surge of violence in Mexico, and was the time when the Sinaloa cartel rose significantly in prominence."

The Business Insider is reporting that Leaked emails from the private U.S. security firm Stratfor cite a Mexican diplomat who says the U.S. government works with Mexican cartels to traffic drugs into the United States and has sided with the Sinaloa cartel in an attempt to limit the violence in Mexico. Mexican Diplomat claims America Invited The Sinaloa Drug Cartel Across The Border.

Here's the scam. The claim is that they are supporting one side to "help reduce the violence" when in reality they are doing the exact opposite. They are fueling the violence. What they are really doing is profiting from arms dealing and drug trafficking. Still. Iran contra never stopped. It continued in Operation Fast and Furious. That is a far worse scandal than Watergate. Iran contra was not about selling Iran arms to free some hostages. Iran contra was about selling arms and cocaine to fund the Contra rebels in Nicaragua. That is what Gary Webb proved.

Freddy posted a link to the article in the Business Insider which states An investigation by El Universal found that between the years 2000 and 2012, the U.S. government had an arrangement with Mexico's Sinaloa drug cartel that allowed the organization to smuggle billions of dollars of drugs while Sinaloa provided information on rival cartels. Just like our local helicopter pilot Colin Martin that was given free range to smuggle drugs as he gave information on smaller rival dealers.