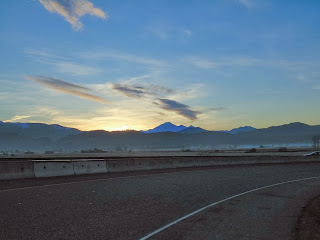 Last Thursday I embarked on a journey to find some new peaks to highlight in the Surrey Winterfest. I've been getting pretty fed up with the blog as of late. As I keep stressing, the gang war is so materialistic and messed up. It's all about selfishness and greed. The dirty politicians tied to it are no better either.

In the Surrey Winterfest, I said I wanted to highlight Janice Shore's brutal murder and add to it a kaleidoscope of other things that you can't find in a crack pipe just to reassure everyone there is good and beauty in the world if we just know where to look for it. Thursday morning as I headed east on the freeway, the sunrise behind Mount Baker was mesmerizing. 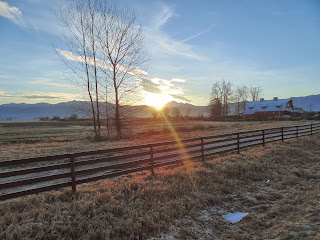 Then when that magic moment happened and the sun popped up over the horizon, that same sunrise was blinding. Coming into Kelowna inversion was in effect and you could see the low hanging clouds blanket the city. 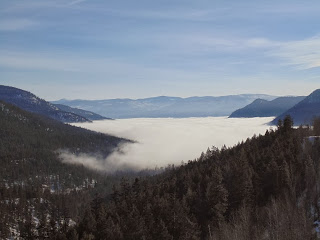 Driving into Vernon was total fog. So I headed up Silverstar and enjoyed the sunny day above the low hanging clouds. It was awesome. 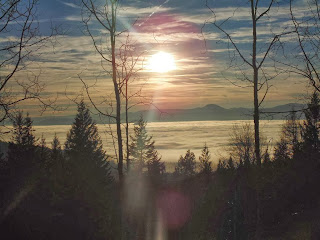 I do have some new sights and some new peaks to share which will indeed be the kaleidoscope's climax for the Surrey Winterfest. It's been a time of self reflection for me. I'm far from perfect and I'm no better than anyone else. I just have a passion against crack and crystal meth because I have seen it destroy lives. Janice Shore's brutal murder was revolting. Giving the homeless free drugs then beating the life out of them for payment is predatory. Those are the rats not the ones reporting them to the police. Let's be clear about that.

The reason I throw other stuff in is because there is so much more to life then that toxic wasteland. So much more. I'll never be rich but I'll never sling crack and I'll never live off the avails pimping a crack ho. I was happy with the Kelowna Summer Jam. I was ready to hang up the blog and say mission accomplished. Then I thought, let's pull a Jay z and do one last encore. Let's focus on the predatory drug dealers selling crack outside the Front Room in Surrey. Only with Bill Fordy and Dianne Watts at the helm those concerns are falling on deaf ears. It's rather pointless as long as they are in charge. So yes, it's time for a changing of the guard in a big way. Just ask the residents and businesses of Newton.

Politics is dirty. Nobody likes politics. Yet without politicians liberty is lost both physically and financially. We need to talk about these things because that is the first step in changing things and righting the wrongs than need to be corrected. So here it is. One last time. Put a cap in my ass now and you'll just get the big f you because it just won't matter. I'll have said what I had to say and I'll have shown you a better way.

My father used to say, Look to the rainbow, follow the fellow who follows a dream. T'was an elegant legacy to bequeath a child so it was. Indeed, though I walk through the valley of the shadow of death, I will fear no evil because I know that life does not end at death. I know that even the darkest day will have a new dawn. I know that behind the darkest clouds the sun is still shining. You just need to step out of the box to see it. They that be with us are more than they that be with them.

Thy mind oh man if thou wilt lead a soul unto salvation must stretch as high as the utmost heaven and search into and contemplate the lowest considerations of the darkest abyss. He must commune with God. The one who has graven us on the palms of his hands. I've shown you the dark abyss. Now it's time to show you the utmost heaven for the climax of the Surrey Winterfest. As I consider the dark abyss outside the Front Room and the ones that murdered Janice Shore, it makes me tired and so much more aware. All I want to do is be more like me and be less like you.