Newton Crime: Are Judges the Problem? 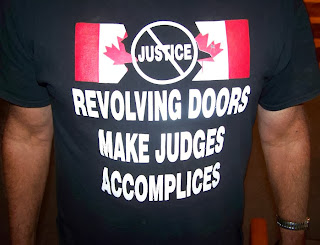 It was nice to see Verne Penner front and centre in the media sporting his Revolving Doors Makes Judges Accomplices T-shirt at the Newton rally. I’ve seen him a couple times at local rallies. I agree judges are part of the problem in Newton but I wouldn’t say they are THE problem like they are in Aldergrove where Verne is from.

Verne started his campaign when he and his neighbors were plagued by a prolific offender name Jamie Pool. He was stealing from them to support his drug habit. Every time the police would arrest him, the judges would let him out right away and he would go right back to stealing from them again.

The VPD launched a campaign expressing their frustration with prolific offenders. The more property crime they committed, the less time in jail they served. It was completely backwards. No doubt that is part of the problem in Newton. Prolific offenders just going through a revolving door judicial system. The half way houses in Newton for criminals as they get out of jail are another part of the problem. We need to make those half way houses drug free. Helping addicts sell drugs and steal to support their habit isn’t doing anyone any favors.

The problem is the police allowing the drug dealers to sell crack there. Pot isn’t the problem. Crack and crystal meth are the problem. We need to get our priorities straight. Dianne Watts claims the city needs more police and she would hire them today but there just isn’t enough money.

This is one of those times where she should just say nothing. Like the old adage declares, it is better to remain silent and be thought a fool, then to open your mouth and remove all doubt.

One Newton resident responded in a letter to the Vancouver Province: “A few years back, Surrey spent $19 million upgrading city hall, which has been at the same location since anyone can remember. It has served us well and should remain where it is. But Watts just flushed $95 million on a new city hall that was not needed and is a waste of our taxes. That money could have gone a long way toward extra policing and cleanup of Newton. It might have even saved the life of Julie Paskall.” Indeed.

Dianne Watts’ life of the rich and famous has been anything but fiscally responsible. She is the last person to say there’s no money left for police. Alex Tsakumis, the latest raging lunatic to join the Surrey Monster Mash, boldly declared that city hall can do nothing about crime in Newton that’s the police only and called Barinder Rasode a whore for claiming the city should look at new ideas to solve the problem.

Strange, since he’s one of Dianne Watts registered attack poodles. That’s not what Dianne Watts said when she ran against Doug McCallum for mayor. When she ran against McCallum she rode into town on a red carpet with a full fanfare talking about a crime prevention coalition. At the time it sounded magnificent. Unfortunately she promised us the world and delivered nothing.

Now all she says is it’s not my fault, it’s not my problem. While Barinder is saying we admit something isn’t working. Let’s look at some possible solutions to solve the problem. Can you see the difference?