The Vancouver Province nails it 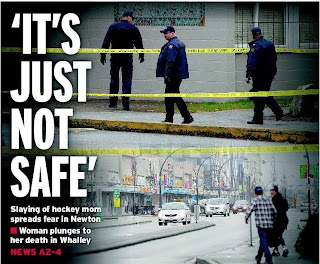 Front page of today’s Vancouver Province was the headline “It’s Just Not Safe” and the caption “Newton residents and business owners say their Surrey neighbourhood has become plagued by drug dealers and violent criminals. Not even Laura Balance’s bullsh*t machine can spin that.

Inside the paper they expound a bit more on an interview with a local business owner in Newton that has expressed frustration with the city’s lack of response to the drug dealers killing her business. We don’t need a task force to figure out what the problem is. We know what the problem is. The problem is Dianne Watts and her Surrey First political party’s refusal to do anything about it.

In the article “It's just horrible, the things we see” Diane MacDermot, the local business owner in Newton describes the struggle she had with drug dealers outside her business. “For a couple of years, Diane MacDermott had battled a drug dealer who had set up shop outside her popular gift store, Beach Basket Giftware, across from the Newton bus exchange and Newton Wave Pool and Recreation Centre.”

She had politely asked him to leave because he was blocking the store door and scaring off customers. He didn’t like that. “He said this was his turf and his territory and he wasn’t going away.” This went on for years. The only thing that got rid of the drug dealer was the fact that he started using the product and turned into a crackhead then disappeared on his own accord.

This is not a new problem. The businesses have complaining about it for years just like the residents were complaining about the illegal booze can in Surrey that the city refused to do anything about which resulted in yet another homicide. What’s new is the fact that the media are now finally reporting it. Up until now if you had any criticism of Dianne Watts you were censored.

In contrast the Vancouver Province ran another article about how Kingsway in Burnaby had similar problems and explains how they solved the problem. One local activist said business owners and residents had to be prodded to report each and every crime they saw. The reason is two-fold. You can’t let criminals get comfortable. And it is statistics that count with authorities. There is a sad truth in the adage, ‘the squeaky wheel gets the oil.’

“It’s your backyard, so you can’t turn a blind eye,” Kumagai said. “Basically you have to take back your area, and get people out walking and going into shops. When everyone comes together, that is when you see the big impacts.” That is what I’m talking about. That is the New York model. That is what we are not doing in Surrey. Remember back in the day we used to have Block Watch and ideas like crime prevention? Those are gone because people have given up. They call the police and the police don’t do anything because city hall has given them different priorities.

If drug dealers are selling drugs outside a business and that business calls the police and the police don’t do anything, that results in criminal negligence. It is inherently hypocritical to pretend that Dianne Watts’ political party supports business when in reality that is the last thing they do. They support flipping agricultural land into industrial for dirty developers that contribute to their campaign. That’s the only business they do.

We need to arrest the crack dealers that are selling crack in public. It is that simple. Failing to do that creates a flood of drug related crime and violence which is what we are now seeing.