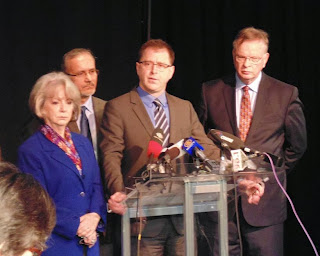 The stereotype is that the right cares about crime and fiscal responsibility while the left doesn't. However, we are now seeing the opposite. Bruce Ralston has always shown up at meetings in Surrey where the public have gathered to express their concerns about crime in Surrey. Penny Priddy and Sue Hammel were at Dianne Watts crime prevention coalition meeting when Dianne Watts was first elected and promised us the moon.

I spoke with Penny Priddy at that previous meeting and was mentioning my past affiliations with some trade unions. She just raised her hand in the air for me to stop and said I am here today as a mother who cares about crime in her community just like any other parent. When it comes to crime, I'm more right wing then my political opponents. Even Adrian Dix was concerned about crime in his community when a mugger was targeting older Asian woman at the 29th Street Sky Train Station in his riding years ago. Harry Baines was at the recent rally in Newton.

No doubt politicians will exploit opportunities to promote themselves. Just look at the Party Quebecquois in Quebec. They supported all the striking University students when they were in the opposition, then turned around and did the exact same thing the ruling party did when they were in power. The kids were all left saying wft. Yet saying something about crime when it is a public concern is better than saying nothing or in Dianne Watts' case saying it's not my fault and not my problem. That sure isn't what she said when she ran against Doug McCallum. Quite the opposite.

This is what was said at today's Press Conference:

Today three Surrey MLA's held a press conference at the Newton Cultural Centre along with opposition leader Adrian Dix to launch their proposals to help reduce crime in Newton called the Surrey Accord. There was no mudslinging, name calling or finger pointing. They simply raised some very constructive ideas to help address the increased crime in Surrey.

Harry Baines stepped up to the plate and talked about how under Wally Oppal there was a lot of talk about establishing a Surrey Community court to help expedite the overloaded court system but nothing ever happened with it. He said he felt that was a good idea that should be followed up on.

Sue Hammel raised the very real concern about the deregulation of recovery homes. That was done ten years ago and that has created a huge problem with shady business owners running recovery homes and exploiting the patients. There was media coverage about that in the past. It is a huge problem that has progressively gotten worse. Once again, people's complaints about the problem have been falling on death ears. She was told there are at least 67 unregistered recovery homes in surrey. I think everyone would agree that helping people get off drugs is a good thing. The problem is the deregulation of these homes which has seen drugs turn up in the homes where tax payers are once again getting fleeced while patients are getting exploited.

This was a very positive, proactive proposal. Sadly, the first question from the media scrum was where is the money going to come from for all this? In fact that was the second and third question as well. In fact the third person that asked the question would not let up. The question got answered and they kept asking it again. It was pathetic to see journalists feeding stereotypes.

Finally I asked Sue Hammel, as a former city councilor how she felt about the new $59 million City Hall being built after 19 million was just spent on upgrading the old city hall. I find out now that it's much more than $59 million. Everyone claims the NDP like to tax and spend but you mentioned priorities, isn't that an example of missmanaged priorities in government spending?

Brunce Ralstron answered the question claiming he was the one that used to be on city council. Actually I has Sue Hammel mixed up with Penny Priddy who used to be on Surrey City council then became an MLA. Bruce was very positive and said he supporting business development in the City Centre and talked about SFU and other projects which I also support. He said as for the city spending that's best brought up with the City itself. No doubt but it is a huge concern with voters in Surrey. Especially when the price tag for the new city hall that we dont need is much more than $59 million. Everyone claims the NDP will tax and spend but Dianne Watts is doing a great job of that herself only she's not spending it on police. Global, The Globe and Mail as well as the Vancouver Province are also reporting on the press conference.

Deregulation of recovery homes has been a disaster and is a huge concern. It's like deregulating the banks which opened the door for banking fraud that caused the S&L crisis in the States. Or how deregulating Wall Street opened the floodgates wide open for investment fraud which taxpayers had to bail out. Fraud caused the Greek financial crisis. Deregulation results in increased crime and increased costs to tax payers. Sue Hammel made a good point. I don't care what party she is from. We need to set the left and right stereotypes aside. We all care about crime and fiscal responsibility. It's time we did something about it.