The Red Scorpions: Who's left? 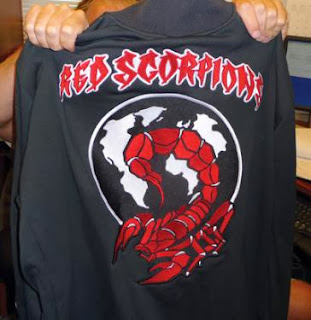 With the recent murder of a member of the Red Scorpions in Abbotsford, blog readers are starting to ask who's left? Most of them are either dead or in jail. One blog reader said they should be referred to ask the dead Scorpions now.

Another blog reader came up with a suggestion. They remembered when my blog first started the purpose was to post pictures of gang members to warn he public. At first we had a lot of people send pictures in. Not so much now. Most of the gang members have clued in and set their facebook profiles to private. Yet people still send in pictures because they have some of these clowns on their friend's list. Just not as often.

In September 2010 Abbotsford Police arrested Michael O'Brien and Mohamed Amarhoun who were linked to the Red Scorpions and were suspected of supplying drugs to the street-level crews in Abbotsford. In October 2013 Nanaimo RCMP announced they had arrested five men believed to have links to the Red Scorpions for selling crack and heroin. Somehow I don't think the Red Lobsters are all gone yet.

Before the Surrey Six the Red Scorpions were selling crack for the UN. After the Surrey Six they started selling for the Hells Angels. The Bacon Brothers used to be affiliated with the UN but broke off to sell drugs "on their own." Yet they didn't have the resources the UN did go on their own. They needed a supplier.

I personally think the UN's denial that Larry Amero and the Hells Angels were ultimately behind the Surrey Six is somewhat astounding. Larry Amero didn't all of a sudden become friends with Jonathon Bacon when he was shot with him in Kelowna. That's when they thought the time was right to come out of the closet with their endorsement. We knew Larry was friends with Jonathon Bacon at the time. He was partying with them. We only had pictures of their girlfriends hanging out together. That would clearly imply Larry Amero and Jonathon Bacon had an association long before the Kelowna shooting despite the fact that Larry the lying sack of sh*t passionately denied it.

Listen to the tapes they say. I listened to the tapes of John Punko saying the UN and not welcome in BC and they will oppose anyone who does business with them. That was way back when the UN kicked their ass in Brandy's. You think the Hells Angels are just going to suck that up and forget about it? Hell no. They will shoot them in the back until it's done with like they always do.

Jamie Bacon can't go to the bathroom by himself. Where do you think a mentally diminished idiot like that gets the idea to extort Corry Lal for selling drugs in "his" turf? The mental midget was from Abbotsford not Surrey. He had to have been extorting Lal for someone further up the food chain. The Hells Angels have been supplying drugs in Surrey since the Surrey House of Horrors.