10 kilos of fentanyl seized out of Toronto Airport 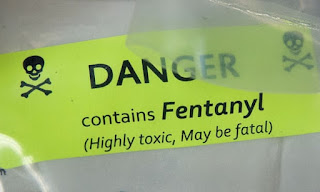 CBC is reporting that "Two Sunwing employees accused of importing cocaine through Toronto's Pearson airport are among 11 people facing dozens of drug-trafficking charges after an undercover operation led by Kitchener RCMP and involving law enforcement in other parts of southern Ontario. RCMP said Friday the following drugs were seized as part of Project OWoodcraft: 10 kg of fentanyl, 1.3 kg of heroin, 1 kg of meth, 30 kg of marijuana, Smaller amounts of carfentanil and cocaine.

The RCMP release said the two Sunwing Airlines employees linked to the drug ring, which was "centred at" Pearson, are charged with attempting to import cocaine and trafficking cocaine. Police also thanked Sunwing for helping them with the probe. The investigation involved undercover officers from the RCMP's Kitchener office purchasing approximately nine kilograms of fentanyl as well as several kilograms of other drugs over the course of several transactions.

So if the RCMP disrupt drug trafficking in Kitchener, Ontario, why don't they do it in Surrey, BC?