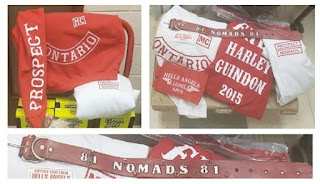 The Ottawa Citizen is reporting that "Police say they seized suspected opioids along with cannabis products and Hells Angels paraphernalia in a pair of raids in and around Kemptville Wednesday." Ontario arrests Hells Angels associates who deal drugs. BC does not.

One of the seized items in the Ontario raid was Hells Angels support paraphernalia that said Harley Guindon 2015. In 2015 the Northumberland News reported that "Three Oshawa men and Peterborough County man face robbery charges in Cramahe home invasion. Harley Guindon, 29, from Oshawa, was charged with robbery, personating peace officer, careless use of firearm, pointing a firearm, possession of dangerous weapons, forcible confinement and three assault with a weapon charges. Brian McMinn, 32, from Havelock-Belmont-Methuen Township, Ishacc Douglas, 32, from Oshawa, and Travis Bell, 23 from Oshawa, are charged with robbery."

Harley Guindon ran a clothing store. Tragically his niece was murdered in 2017. 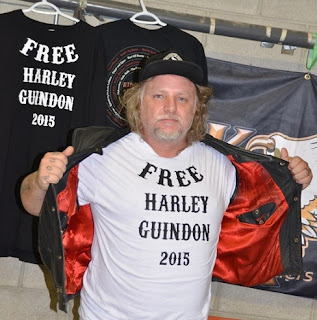 Posted by Dennis Watson at 6:37 PM