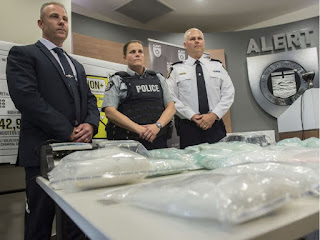 The Edmonton Journal is reporting that "More than $1 million in cash, drugs and cars were seized by the Alberta Law Enforcement Response Team (ALERT) after a nine-month investigation dubbed Project Embrace. Investigators say the operation involved an Edmonton group importing drugs from B.C. and distributing them in Alberta, particularly in the communities of Bonnyville, Lloydminster, St. Paul, Cold Lake, Little Smoky and Frog Lake." Those aren't bags of N64 games.

"More than six kilograms of cocaine, two kilograms of methamphetamine, almost $350,000 in cash, 18 kilograms of a cocaine buffing agent and a 2007 Volvo XC90 with a hidden compartment were seized. Six people are facing drug trafficking and other charges, including an Edmonton man alleged to be at the centre of the operation. Police searched four Edmonton homes and two Vancouver apartments as part of the operation and seizures." 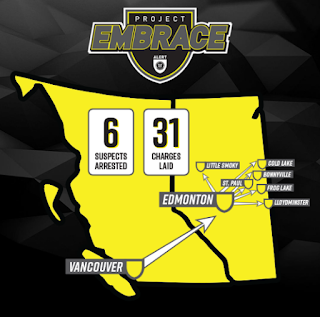 Who the f*ck do you think this Edmonton drug ring was tied to? The Surrey RCMP should bust the Hells Angels drug trafficking out of Shakerz. Failing to do so is criminal culpability.

Posted by Dennis Watson at 1:51 PM