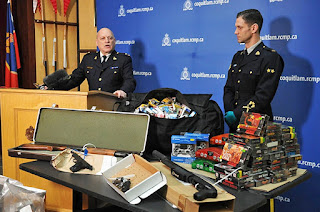 The Burnaby Now is reporting that "Dillon Juel Stanton, 29, told the court he robbed small businesses to fuel drug addiction sparked by unresolved trauma from witnessing his father's 2010 murder." For f*ck sakes. Coquitlam RCMP drama queen Bryon Massie held a press conference displaying some of the stolen property seized in the operation. A bunch of old N 64s. How old are those video games? They're virtually worthless.

"Nineteen-year-old Dillon Juel Stanton, son of notorious ex-Hells Angel Juel Ross Stanton, was at home the day his father was gunned down in the family’s backyard in 2010." Get a life. Put him in rehab and leave him alone.

Juel's son is obviously not affiliated with the club that killed his father. He's a low level thief supporting a drug addiction. He was charged with using an imitation firearm to commit a serious offence and with one count of possessing an illegal firearm. He wasn't charged with using the firearm to commit a criminal offence. Oh but he had a pistol grip on his shotgun. GMAFB. My Mossberg Maverick came with a pistol grip straight from Canadian Tire. That is not an illegal firearm as long as the overall lengh in more than 660 mm or 26 inches and if it's a 470 mm or 18.5 inch barrel it doesn't have to be registered. It's a non restricted firearm. Stop lying.

BTW You measure the shotgun barrel length from the inside not the outside. That's the problem. So many RCMP officers have absolutely no idea what the firearm laws are in Canada. You really should take a course. In Canada shotgun barrels have to be 18.5 inches not 18.

Dillon's father was completely f*cked over by the club. The day the news broke of his murder witnesses saw David Giles in Kelowna having a serious talk with some younger members as if he was explaining to them why they did it. David Giles was a POS. Juel Stanton wasn't any more violent than Tony Terezakis who filmed himself beating the life out of drug addicts who owed him money. Juel Stanton was killed right before his next court date.

They didn't want him to be the first BC HA to get criminal org status. They saved that privilege for David Giles, the POS that ordered Juel's murder. With friends like that, who needs enemies.

Juel needed some money for lawyers. He had it but he was ripped off by another worthless POS in the club. I'm not going to name the member or state what the money went to. Someone else will do that and I'm not going to bite their sh*t. My point is that there is no L&R in the BC Hells Angels. Only Greed and Betrayal. History has recorded that.

Posted by Dennis Watson at 1:32 PM