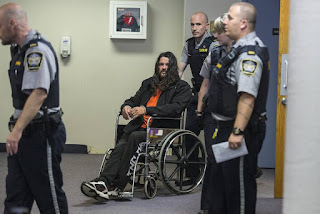 TBM Scandinavia is reporting on an article from the Chronicle Herald which states that "A member of the Hells Angels outlaw motorcycle club from Ontario has pleaded guilty to drug-related charges in Nova Scotia. Mark David Heickert, 50, of Orillia pleaded guilty last week in Dartmouth provincial court to three charges: conspiracy to traffic cocaine, conspiracy to possess proceeds of crime and breaching his release conditions by having contact with members of the Hells Angels or affiliated clubs. Heickert and an Eastern Shore man – Paul Francis Monahan of Ostrea Lake - were arrested in November 2017 following a nine-month police investigation that included undercover officers" where two kilos of cocaine were seized.

Mark Heickert is a member of the Hells Angels in Oshawa. Hells Angels associate Sean Heickert was found guilty of the November 2007 murder of Bekim Zeneli which set off the Winnipeg gang war. He murdered one of their own guys so the Ontario Hells Angels could take over the Thompson drug trade from the Winnipeg Hells Angels. Sh*t Forever, Forever Sh*t.