20th anniversary of the persecution of the Falun Gong

If you were having Starbucks in Vancouver today and saw a parade with a marching band go by and was wondering what it was about, today is the 20th anniversary of the persecution of the Falun Gong or Falun Dafa in Communist China. It was nice to see Suki from the South Asian Press in Surrey there. New Tang Dynasty, Epoch Times and Ming Pao News were also there. Independent news outlet we can rely on. Post Media News was not present.

It is astounding how much influence the Communist Party of China has over our media here. They run the Confucius Institute which has absolutely nothing to do with promoting the virtues of Confucius. Instead they are killing traditional Chinese cultural heritage through their cultural genocide. This is why Hong Kong needs to be worried. Executing political prisoners to order for organ harvesting is big business. We need to speak out against it.

"NEW YORK—Hundreds of candles in the shape of lotus flowers illuminated the evening sky in New York as a group of meditators attired in yellow shirts sat silently in front of the Chinese consulate, their round yellow sitting mats neatly aligned in long rows along the riverside."

"WASHINGTON—Despite the stuffy summer humidity, about 2,000 people donning yellow shirts congregated at Capitol Hill on July 18 to call for an end to the persecution of the spiritual practice Falun Gong in China. July 20 marks 20 years since the Chinese communist regime launched its sweeping campaign to eradicate Falun Gong, an ancient Chinese meditation practice."

Dennis Watson speaking at the Falun Gong rally in Vancouver. 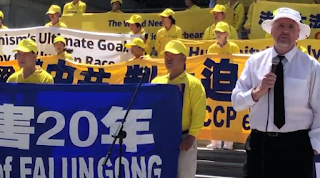