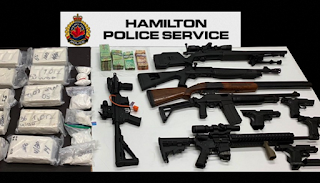 CHCH is reporting that "A Hamilton man and Burlington woman are facing multiple charges after police seized guns, cash and more than $1 million in drugs. Earlier this summer, police launched an investigation into alleged drug trafficking by a Hamilton man."

"Officers arrested 46-year-old after Vincent Poole after his vehicle was pulled over by police on Wednesday afternoon. Investigators say he was in possession of roughly 10 kilograms of cocaine with a street value of $1 million."

"The next day police executed a search warrant at a home they say Poole attended regularly near Magnolia Dr. and Mohawk Rd. West. on Hamilton Mountain. Police say they found multiple lawfully owned firearms in the home that were kept in an unsafe manner including two loaded guns next to the resident’s bed. Officers seized cocaine, ammunition, oxycodone, and about $50,000 in proceeds of crime."