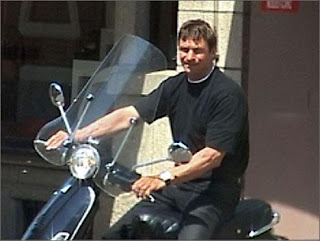 BBC is reporting that "Willem Holleeder, the Netherlands' most notorious gangster, has been found guilty of ordering a series of murders of figures in the world of organised crime. Holleeder, now 61, achieved notoriety in the 1980s for the kidnapping of beer tycoon Freddy Heineken. He then became a big crime boss and has been convicted after a lengthy and expensive trial in Amsterdam. Among his victims was friend and associate Cor van Hout. The judges convicted Holleeder of ordering five murders and one manslaughter and sentenced him to spend the rest of his life in jail. They also found that he had formed a crime gang and ordered cold-blooded killings with jailed associate Dino Soerel and since-murdered criminal Stanley Hillis.'

BBC refers to Willem Holleeder as the Dutch godfather. In 2013 Het Parool reported that "One of the victims that Danny K., Dick V. and Willem Holleeder have extorted according to the judiciary is Theo Huisman, the recently dismissed president of the Amsterdam Hells Angels." The Trio formed the No Surrender crew in Amsterdam.

In 2014 NCR reported that Danny K., Dick V. and Willem Holleeder were charged with threatening and extorting Hells Angel Theo Huisman. I thought Hells Angels never dialed 911? Once again they went running to the cops for protection. Just like here in BC. The year before Dick V beat up Theo Huisman when he was president of the Amsterdam Hells Angels.

Posted by Dennis Watson at 9:55 AM