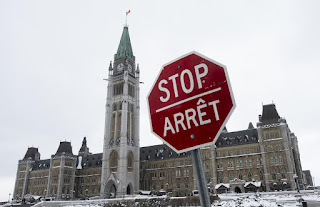 CBC is reporting that "Lawyers representing SNC-Lavalin have opted for trial by judge alone in a corruption case that has loomed over the Montreal-based engineering and construction giant. The company was ordered to stand trial last May. It is accused of paying $47.7 million in bribes to public officials in Libya between 2001 and 2011. SNC-Lavalin, its construction division and a subsidiary also face one charge each of fraud and corruption for allegedly defrauding various Libyan organizations of $129.8 million."

SNC-Lavalin is a bad company like unto Lockheed Martin. We really need to stop bailing them out with tax dollars. The Canadian economy will not take a hit if SNC-Lavalin goes down because other companies will rise to take it's place. That's how it works in a free market. Other companies that aren't so riddled with corruption. Corporate Communism has got to go. SNC-Lavalin has a long history of under biding and over charging government contracts then committing fraud with tax dollars only to give the politicians a kickback. This obscenity needs to come to an end.

Posted by Dennis Watson at 2:48 AM