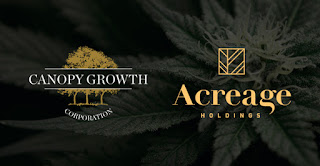 CNBC is reporting that Bruce Linton, co-CEO of Canopy Growth, said he was fired from the Canadian pot company he founded in 2013 in an interview with CNBC on Wednesday. Canopy, the world’s largest publicly traded cannabis company by market value, earlier Wednesday announced in a press release that Linton was removed as co-chief executive officer and a member of the board, effective immediately. Mark Zekulin, who had been co-CEO with Linton, becomes the sole CEO while the company searches for a replacement."

The move comes after a 3.4 billion dollar acquisition of a US company who called for a reconfiguration of the board. Having said that this is all pretty much beyond me. I don't invest in legal pot because I personally don't support it. I see it as a dirty business that inhibits youth but recognize that it will continue to flourish and the cop pot entities that are striving to use their contracts to create a monopoly in the industry are in my opinion dirty.

Maybe they want to hire Mark Emery. Unlikely. They just want to use people and cast them aside when they are done with them. It's the nature of the business.