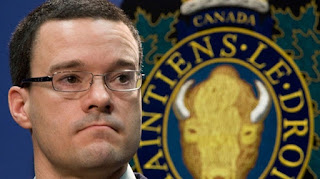 The Chronicle Journal is reporting that "RCMP say a settlement has been reached in a lawsuit that alleged a former spokesman for the force in British Columbia sexually harassed a civilian employee. The lawsuit against former inspector Tim Shields had been scheduled to go to trial on Tuesday but court documents show the parties agreed to dismiss the action without costs in May. RCMP Sgt. Janelle Shoihet says the terms of the settlement are confidential."

Another gag order hides more RCMP sexual harassment. The civil claim alleged a top-down culture of harassment within the force. That is why there was a class action law suit against the RCMP which was also settled out of court. Tim Shields is a bad man.

Posted by Dennis Watson at 2:22 PM