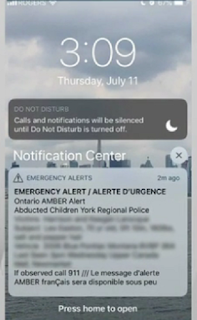 Narcity is reporting that "Police have once again been receiving complaints from residents after issuing an Ontario Amber Alert at around 3:00 AM on Thursday." This is where the government crosses the line and becomes way too intrusive.

People were understandably upset because they didn't want these alarm sounds on their cell phones in the middle of the night. "York Regional Police emergency dispatchers were forced to deal with several complaint calls overnight from residents who were upset that the alert woke them. Journalist Jeremy Cohn claims that some of the calls have been abusive and very rude."

"We apologize for the inconvenience, but when there are kids' safety at risk, we pull out all the stops, and this was just one of the tools that was being used,” York Regional Police Const. Andy Pattenden said while explaining how police dealt with the calls.

You are not listening. The public doesn't want to get these alarm notifications every time a kid goes missing. Send a press release out the the media not to every residents private cell phone. That is WAY too intrusive. You mean well but what you are doing is not right.

You're just a public servant. The public pays your wages. STFU and do as your told.